For about the last 13 years we have been going to Tenerife and although we always say it would be nice to try somewhere we always end up back in Tenerife. Tenerife has something for everyone and we have went as a couple with our parents then on honeymoon and then every year with our children. We returned this year to parque Santiago 4 were we have stayed once before and yet again it didn’t disappoint.

We had booked a one bedroom self catering apartment and we requested a nice view. When we arrived we were upgraded to a two bedroom family room and had the same side/sea view as we had the last time we stayed. The balcony was brilliant it was a double balcony with patio doors from both the bedroom and living room. Click here to have a look at the rooms and villas they offer.

It was great for us especially as when Gracie was sleeping we were able to come up to our room and let her sleep and the boys could play inside if they wanted while we sunbathed on the loungers.

When we booked our holiday we didn’t know whether we would be in parque Santiago 3 or 4 until we got there. Parque Santiago 3 has a great play area with slides and a park. There is 6 slides in it from age 4 to 12 as well as the other swimming pools and a jacuzzi . Jake especially liked the slides and the pool was good and shallow for Gracie and Alfie to sit and paddle.

So between the the two apartments we had plenty of choice of swimming pools and parks. There was plenty of sun loungers and parasols in both Parque Santiago 3 and 4.

We have stayed in a few different hotels now starting at the Marylanza hotel which we went to on our honeymoon but it’s prob about 20 mins to half an hour walk from it to the beach and with kids it’s not really practical. So we have gradually moved closer down to the centre and I think with the Parque Santiago we have found the perfect location. On one side were you go in through the reception, you have the Main Street with a variety of shops supermarkets, restaurants and entertainment. On the other side you can go in and out via a secure gate and you are on the promenade and beach.

We enjoy relaxing as much as possible on holiday and tend to not pack loads in to each day but I think Tenerife has something for everyone. We normally went a walk in the morning and then either went to the pool or the beach.

This time on most days the kids ate lunch in the apartment and then Gracie slept but the passed few times we have have been David and me have got a takeaway lunch from a little bakery type place in the vista sur area called la panaria. They do lovely focaccia bread with ham and cheese and salad. David normally walked up and brought this back for us with a coffee. It was about 8.50euro for us both.

There are plenty of hyperdino supermarkets about that are really cheap for bread ham and yoghurts for the kids. We went one day to aqualand water park in costa adjeje which was great for the kids and they had loads of slides suitable for the wee ones even Gracie was able to sit and paddle. It was quite a dull day when we went so the water was quite cold although there was a warm water pool. Again there was a supermarket across from the water park where you can buy lunch and take into the park. We had met up with a wee friend of jakes from school and Jake Alfie and the other two wee boys had a great time playing together and before we left we went to see a dolphin show which was included in the price however if you wanted to meet the dolphins it was an extra 20euro each. Also when you come in to the airport sometime you well be given a voucher for aqualand we used them and got 3 euro off per person.You can find prices here

We have also been to Siam park which was amazing and when the kids are bigger we will prob go back. We would also like to take them to Loro park which we went to on our honeymoon the orca show was brilliant and they have connections to sea world in Florida. There is also the jungle park and a monkey park which we have never been to but would love to got as well and the next time we would maybe take them out on a boat trip. It’s hard to fit it all into a week but next time we might go for 10 days. On one evening we went to mini golf on the Main Street which the boys enjoyed and another evening we went to Siam mall which is a big shopping centre with eating places, great shops and great kids entertainment.

There is another shopping centre called Parque Santiago 6 which went to one evening. The shops in Tenerife are really goodrom high street brands like Zara’s H&M, stardavarius to high end designer like Gucci, Max Mara and Guess to name a few. On another evening we went to costa Adeje to Harley’s restaurant. David found it on Facebook and thought the boys would love it as there are old cars outside turned into tables. Unfortunately you have to book these tables and I think quite they get booked up quite quickly but the boys did get to sit in them for a photo.

When we arrived we saw a leaflet for holiday hire shop at reception and decided to hire a baby walker for Gracie. It was 15€ for a week and 10€ refundable deposit. It was so handy we got it delivered to our room and just had to return it to reception when checking out.

Next time we go david would also like to hire bikes out as we saw so many people doing that this year. That’s just a wee snippet from our holiday. We love Tenerife and will hopefully get back next year but you never know maybe we could squeeze in another wee holiday before his year is out. 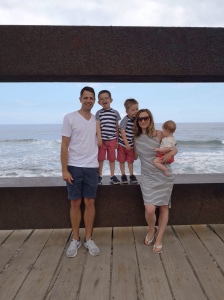